The original Bailey Mill was reflective of the changing locations in the textile industry. ​​ It was purpose built, driven by steam power from the outset; it utilised modern transport systems of rail and turnpike development, and employed up to 200 people.

It was built in 1865 by the Mallalieu family, who had previously been weaving wool at Shady Grove.

In 1871 it employed 180 workers and was primarily producing flannel. ​​ By 1880 it was producing shawls, which probably reflected the need to diversify as markets became more difficult to sustain.

In 1892 the Mallalieus had bought 5 cottages for offices, 2 fields, plus Knarr Mill and Woodhouse Mill to extend capacity. ​​ In 1899, following the acquisition of Hudson & Co. of Uppermill it​​ added a “hatting” department.

produce flanneling and shawl, but by the 1950s the mill was back producing woollen cloth.​​

The mill was built to take advantage of​​ the new technology of the day. ​​ It was also served directly by the branch line from Uppermill, and was alongside the Austerland – Wakefield turnpike that served Manchester and the West Riding of Yorkshire. 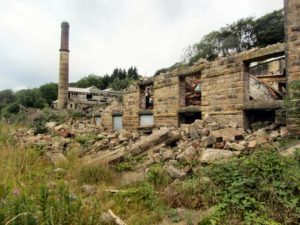 Arson 2016 after having been empty for several years.